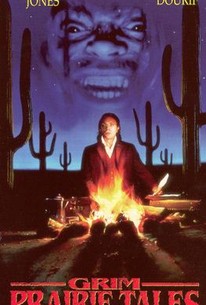 An entertaining hybrid of Amicus-style horror anthology and gritty low-budget western, this first-time effort from writer-director Wayne Coe succeeds where many such genre-bending attempts have failed. The quartet of uneven but well-mounted stories are spun around a desert campfire by grizzled, menacing bounty hunter Morrison (a rousingly hammy James Earl Jones) and wet-behind-the-ears city slicker Farley (Brad Dourif). Morrison starts off with the tale of an Indian tribe's ritual revenge against the drunken cracker who desecrates their sacred burial ground; When Farley seems interested but unfazed, Morrison follows up with the more visceral story of a Good Samaritan who succumbs to temptation while rendering aid to a pregnant woman, leading to a particularly disgusting (though definitely original) demise. Appalled by the storyteller's lack of taste, Farley counters with a down-to-earth morality tale involving a prairie settler's young daughter who witnesses her father's horrifying act of hate, realizing that the man she trusted with her life is a very human breed of monster. Morrison acknowledges his companion's skill but offers another violent story according to his own idiom -- that of a slick gunfighter who gets his comeuppance by his own hand after winning a deadly competition. The stories feature fine acting and direction but are ultimately overshadowed by the engaging framing story and lack much of the dramatic payoff of their earlier British counterparts.

Will Hare
as Lee

New Horror Stories for Your "Amusement"
View All