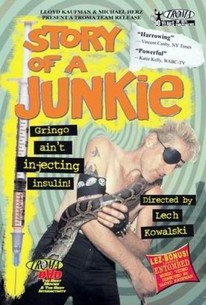 Gringo: The Story of a Junkie is direct cinema documentarian Lech Kowalski's third feature, completed after DOA, his seminal portrait of punk rock in America. The title junkie, John Spacely, was a fixture on the streets of New York City's Lower East Side in the 1980s and early '90s. His daily routine takes him on a search for dope and maybe a safe spot to eyeball comic books. The scenes of narcotic selling and using, recorded with intimacy by guileless video and nearly all at night, are without an ounce of glamour, as are those individuals who populate the streets of this closed (at the time) community. Presented ostensibly as a documentary (all of the events and characters are real but some scenes were re-enacted), the bottom rung of the drug trade ladder is revealed as the bottom line of this NYC neighborhood, a time and place preserved as it will never be again.

There are no critic reviews yet for Gringo. Keep checking Rotten Tomatoes for updates!

There are no featured audience reviews for Gringo at this time.