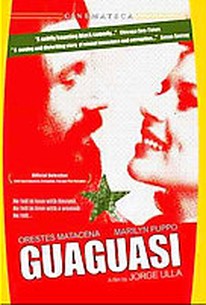 Rather than dramatize Castro's Cuban revolution as a central theme, this film made by Cubans in exile focuses on the disintegration of a young peasant's morality once he joins the revolutionary forces. The naive peasant was expecting adventure but before his stint in the military has ended, he is a trained killer, whether he is fully aware of it or not. When he takes up with a dance-hall woman in Havana and turns to drugs and alcohol, his decline accelerates, putting both his lover and his friends at the mercy of his slipping hold on stability. ~ Eleanor Mannikka, Rovi

There are no critic reviews yet for Guaguasi. Keep checking Rotten Tomatoes for updates!

There are no featured audience reviews for Guaguasi at this time.