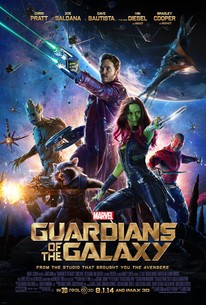 Guardians of the Galaxy

Guardians of the Galaxy is just as irreverent as fans of the frequently zany Marvel comic would expect -- as well as funny, thrilling, full of heart, and packed with visual splendor.

Guardians of the Galaxy Videos

1:54
Guardians of the Galaxy: Behind the Scenes - Chris Pratt and Dave Bautista Screen Test

Guardians of the Galaxy Photos

From Marvel, the studio that brought you the global blockbuster franchises of Iron Man, Thor, Captain America and The Avengers, comes a new team-the Guardians of the Galaxy. An action-packed, epic space adventure, Marvel's "Guardians of the Galaxy" expands the Marvel Cinematic Universe into the cosmos, where brash adventurer Peter Quill finds himself the object of an unrelenting bounty hunt after stealing a mysterious orb coveted by Ronan, a powerful villain with ambitions that threaten the entire universe. To evade the ever-persistent Ronan, Quill is forced into an uneasy truce with a quartet of disparate misfits-Rocket, a gun-toting raccoon, Groot, a tree-like humanoid, the deadly and enigmatic Gamora and the revenge-driven Drax the Destroyer. But when Quill discovers the true power of the orb and the menace it poses to the cosmos, he must do his best to rally his ragtag rivals for a last, desperate stand-with the galaxy's fate in the balance. (C) Walt Disney

Lee Pace
as Ronan the Accuser

Benicio Del Toro
as The Collector

Christopher Fairbank
as The Broker

Krystian Godlewski
as On Set Groot

Alexis Denisof
as The Other

Richard Katz
as One Legged Prisoner

Rosie Jones
as Ladies Of The Boot of Jemiah

Alex Rose
as Ladies Of The Boot Of Jemiah

Emily Redding
as Ladies Of The Boot Of Jemiah

Josh Brolin
as Thanos
View All

News & Interviews for Guardians of the Galaxy

Marvel’s Casting Director Breaks Down How She Assembled the Avengers and the Biggest Names in the MCU
The 21 Most Memorable Moments from the MCU… So Far!
Marvel Movies Ranked Worst to Best by Tomatometer
View All

Critic Reviews for Guardians of the Galaxy

Audience Reviews for Guardians of the Galaxy

Guardians of the Galaxy Quotes