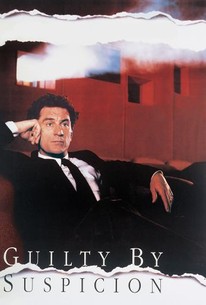 The directorial debut of producer Irwin Winkler, Guilty by Suspicion is a sobering account of one movie executive's woes in dealing with the political fallout from the McCarthy Era Hollywood blacklist. Robert De Niro stars as David Merrill, a film director in the 1950s whose obsession with his burgeoning career has estranged him from his wife Ruth (Annette Bening) and their son. When he returns from a trip to Paris, Merrill is surprised when told by his boss, Darryl F. Zanuck (Ben Piazza) that he's been summoned to appear before the House Un-American Activities Committee, which is investigating Communist ties to Hollywood. Although Merrill once attended a meeting years before, he's not a Communist, and he refuses to help the committee wreck the career of his friend Bunny Baxter (George Wendt). Merrill becomes blacklisted, unable to find work even in menial positions or under assumed names as the editor of a B-movie or the director of a low-budget Western. Reconciled with his family, Merrill caves in and agrees to testify, but as he prepares to "name names," his conscience plagues him.

Craig Smith
as Director of Photography

Natalie Zimmerman
as Woman on Buckboard
View All

Critic Reviews for Guilty by Suspicion

Audience Reviews for Guilty by Suspicion