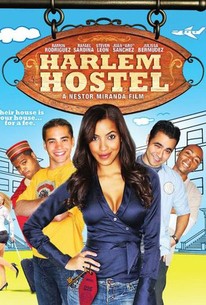 A group of friends from Queens decide to move into the city together where they hope to fulfill their dreams and experiencethe fast paced glamorous world of Manhattan. They end up settling into a run down brownstone in Harlem.After moving in things take a turn when they realize that their dreams aren't going to be realized overnight so in orderto stay afloat they turn their place into an illegal youth hostel.Ben, an uptight assistant graphic designer at a hip magazine company works hard to be noticed by both his boss andhis beautiful colleague, Julie. He still lives at home with his mother and his brother, Mark, and annoying nephews.Although it's not the best environment to be around, he deals for the time being in order to pay off his student loanand credit card bills.Ben's childhood friend, Rick, arrives at his door step back from the Iraqi war. He needs to crash at his place since hisMother retired to Florida and his still auto mechanic father hasbecome estranged from him. Rick intends to fit back into civilianlife and use his GI Bill to go to college.Ben soon has a fight at home which serves as the last straw andfinally gives in by moving into a run down brownstone in Harlemwith Rick and their irresponsible, womanizing friend, Will.After some unsuccessful job interviews Will decides to be hisown boss. While Ben is away on a business trip Will convincesRick that they should become entrepreneurs. Upon Ben's return,he finds several beautiful girls walking around the houseasking for Will. At first, Ben thinks that Will is having an orgy.He approaches Will to learn that the people walking around thehouse are guests. He and Rick have turned their place into ayouth hostel, a cheap hotel for back packing youths.They soon befriend a neighborhood teen named, Sam. A true hustler at heart, Sam is the go to guy. Weed, knockoffapparel, bootleg CD's, DVD's, whatever your heart desires. He's the comic relief of the bunch.At first the money and the beautiful women passing through seem like paradise but things take a turn as hijinks andchaos overwhelm our protagonists. They must immediately become responsible adults as they soon learn about life,love, relationships and of course, each other. --© Maya Releasing

Ramon Rodríguez
as Will

Ruperto Vanderpool
as John
View All

There are no critic reviews yet for Harlem Hostel. Keep checking Rotten Tomatoes for updates!

There are no featured audience reviews for Harlem Hostel at this time.