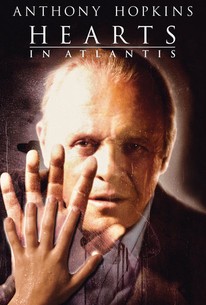 Hearts in Atlantis is well-acted and beautiful to look at, but the movie is nothing more than a mood piece.

One of the short stories in a best-selling collection by author Stephen King becomes this mystery adapted for director Scott Hicks by screenwriter William Goldman, who previously transformed a King story into a box-office hit (Misery, 1990). In the summer of 1960, young Bobby Garfield (Anton Yelchin) is sharing adventures with his best friends Carol (Mika Boorem) and Sully (Will Rothhaar) when an enigmatic lodger named Ted Brautigan (Anthony Hopkins) rents a room in his family's boarding house. Bobby's self-absorbed, widowed mother Liz (Hope Davis) couldn't care less about her son, so Bobby, who is being tormented by local bullies, quickly befriends the otherworldly Ted, becoming his confidante, and reading the paper to him to save the aging man's failing eyesight. Soon, Bobby learns that Ted possesses supernatural gifts, has a haunted past, and is being pursued by sinister men whose intentions are unclear. Hearts in Atlantis co-stars David Morse, who appeared in the previous King adaptation The Green Mile (1999), as the adult Bobby.

Kathie France
as Rider at Carnival

Sean Edwards
as Soldier at Funeral

Critic Reviews for Hearts in Atlantis

Audience Reviews for Hearts in Atlantis