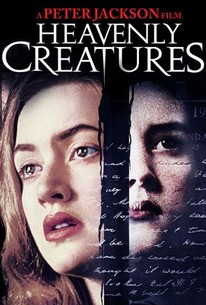 Dark, stylish, and captivating, Heavenly Creatures signals both the auspicious debut of Kate Winslet and the arrival of Peter Jackson as more than just a cult director.

After winning a cult following for several offbeat and darkly witty gore films, New Zealand director Peter Jackson abruptly shifted gears with this stylish, compelling, and ultimately disturbing tale of two teenage girls whose friendship begins to fuel an ultimately fatal obsession. Pauline (Melanie Lynskey) is a student in New Zealand who doesn't much care for her family or her classmates; she's a bit overweight and not especially gracious, but she quickly makes friends with Juliet (Kate Winslet), a pretty girl whose wealthy parents have relocated from England. Pauline and Juliet find they share the same tastes in art, literature, and music (especially the vocal stylings of Mario Lanza), and together they begin to construct an elaborate fantasy world named Borovnia, which exists first in stories and then in models made of clay. The more Pauline and Juliet dream of Borovnia, the more the two find themselves retreating into this fantastical world of art, adventure, and Gothic romance as they slowly drift away from reality. The girls' parents decide that perhaps they're spending too much time together, and try to bring them back into the real world, but this only feeds their continued obsession with Borovnia (and each other) and leads to a desperate and violent bid for freedom. Featuring excellent performances (especially by Kate Winslet) and imaginative production design and special effects, Heavenly Creatures skillfully allows the audience to see Pauline and Juliet both from their own fantastic perspective and how they seem to the rest of the world. Remarkably enough, Heavenly Creatures is based on a true story; in real life, Juliet grew up to become mystery novelist Anne Perry. ~ Mark Deming, Rovi

Peter Jackson
as Bum outside theater

Barry Thomson
as Farmer/Policeman
View All