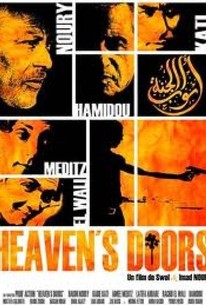 As co-directed by brothers Swad and Imad Noury (and produced by their mother, Pilar Cazorla), The Moroccan picture Heaven's Doors (2005) employs an episodic narrative, with three related substories presented sequentially. The Nourys shoot the episodes in distinct cinematographic styles (and with distinct overtones) suited to each tale, recalling Humberto Solas's masterpiece Lucia (1969). The opener revolves around Ney (Rabie Katie), a young and kind-hearted construction worker. Cared for with much tough love by his unduly protective, blind mother (Latifa Ahrare), and emotionally intertwined with his younger sister (Samia Berrada), Ney's Achilles' heel lies in his extreme naïveté and lack of wisdom, manifest through his decision to spend his free time with a seedy, thuggish bunch of neighborhood boys. He soon allows the group to talk him into abandoning construction work in favor of organized crime, and becomes involved in a bloody skirmish with a local gangster, Faisal (Farid Regragui) that leads to tragedy for both - as Faisal's wife and young son look on, helplessly. The second episode concerns Lisa (Aimee Meditz), the American widow of Faisal's late brother, who takes in Faisal's boy, Salim (Taha Ghrabi) and his mother, gradually diminishing and then eliminating her own self-doubts about her ability to care properly for either. And in the third episode, laconic, introverted Smail (Hakim Noury) is released from prison after a 15-year incarceration for robbery, and attempts to actualize his two desires: to both see his ailing, elderly mother, and to rub out the friend whose testimony sent him to prison.

There are no critic reviews yet for Heaven's Doors. Keep checking Rotten Tomatoes for updates!

There are no featured audience reviews for Heaven's Doors at this time.