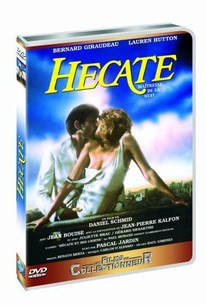 Clothilde de Watteville (Lauren Hutton) is compared to "Hecate," a three-headed Greek fertility goddess and a protector of witches who came to be associated with Persphone and Hades. Clothilde/Hecate runs into Julien Rochelle (Bernard Giraudeau), a very young French diplomat in north Africa just before the outbreak of World War II and the two have a casual sexual encounter that leads to another such meeting, and another. His interest in her and his curiosity are heightened when she refuses to reveal any information about herself, and when she disappears for stretches at a time without any explanation. As his sexual passions increase at a par with his frustration at her behavior, he gives up trying to relate at all and walks out of the relationship. A few years later they meet at a diplomatic reception in Berne, the diplomat is older and perhaps wiser, but Clothilde's behavior is an inexplicable as ever. ~ Eleanor Mannikka, Rovi

There are no critic reviews yet for Hécate. Keep checking Rotten Tomatoes for updates!

There are no featured audience reviews for Hécate at this time.