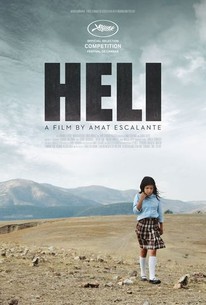 There's no denying the seriousness of Heli's story or the raw power of its more uncomfortable moments, but they're used in service of a grimly alienating film that many viewers may ultimately find unrewarding.

Heli (Armando Espitia) is a young man living in a small town with his father, his wife,their baby and his 12-year-old sister Estela (Andrea Vergara). He works at the same car factory as his unassuming dad, although on different shifts, while his wife is still adjusting to being a mother and recovering from a difficult birth. His sister, a conscientious student, is stumbling through an unconsummated love affair with an older guy, Beto (Juan Eduardo Palacios), who is treated like dirt in brutal police cadet training sessions in the desert. One foolish decision on the too-green sister's part - allowing Beto to hide some drugs in a water tank on the roof of their home - sends the lives of her entire family into a tailspin. The sudden involvement of a vicious special crime force and, later, the corrupt local police only reinforces the picture of this family as victims of forces way beyond their control. (c) Cinema Village

Critics Consensus: How to Train Your Dragon 2 is Certified Fresh
View All