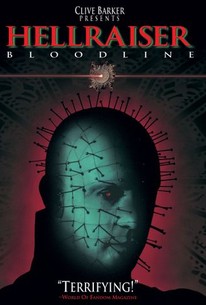 Clive Barker's horrific creation Pinhead (Doug Bradley) returns to the screen for the fourth (and purportedly final) time in this time-juggling horror opus. In 18th century France, Phillip Lemarchand (Bruce Ramsay) constructs a black puzzle box for the wizard Duc de L'Isle (Mickey Cottrell); however, the box has potentially deadly consequences when it's discovered that it can be used to open the gates of hell, freeing the demonic Pinhead. Two hundred years later, the box finds its way into the hands of John (also played by Bruce Ramsay), a New Yorker and distant descendant of Lemarchand who is being pursued by Pinhead and his minions, while another 200 years hence, Dr. Paul Merchant (Ramsay again) is trying to make his way aboard a space station in hopes of reclaiming the puzzle box, hoping to destroy it before it can be used to once again release the demons upon the world; Merchant is also attempting to build a second box that can close the gates that the first box opens. While makeup artist Kevin Yagher made his directorial debut with this film, the final cut was taken away from him and considerably shortened, which in his mind severely compromised the film's complex, time-traveling narrative. He opted to instead credit his work to Alan Smithee, which was the Directors Guild's official pseudonym for directors who feel their work has been tampered with.

Jody St. Michael
as The Beast