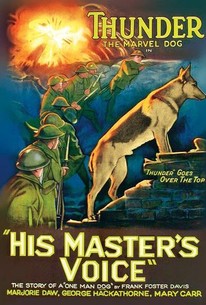 Despite its Victrola-inspired title, His Master's Voice was a silent film (though it was released with an accompanying musical score, written by Gus Edwards, Howard Johnson and Irving Bibo, for the benefit of moviehouse pit orchestras). Rin-Tin-Tin wannabe Thunder the Dog stars as an army mutt during World War I. With Thunder's help, human co-star George Hackathorne overcomes his cowardice on the battlefield. Hackathorne then returns home to settle accounts with the crooked rival who stole his gal (Marjorie Daw). The novelty: His Master's Voice is related in flashback by Thunder himself, who is seen at the beginning and end of the film "telling" his story to his pups. ~ Hal Erickson, Rovi

Thunder the Dog
as Himself

Will R. Walling
as William Marshall

White Fawn
as The White Dog

Flash the Dog
as The Pup
View All

Critic Reviews for His Master's Voice

There are no critic reviews yet for His Master's Voice. Keep checking Rotten Tomatoes for updates!

Audience Reviews for His Master's Voice

There are no featured audience reviews for His Master's Voice at this time.