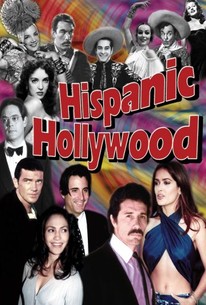 This video documentary looks at the history of Hispanic or Latino stars and pictures in Hollywood, focusing on the last half of the 20th century. Stars such as Jimmy Smits, Antonio Banderas, Sonia Braga, and others discuss their experiences as Hispanic actors. They reflect on prejudices and attitudes, "Latin lovers" such as Valentino, and on how their positions in Hollywood differ compared to previous Hispanic actors. Highlights include excerpts from various movies with Latino actors, stories or themes, including the Academy Award-winning West Side Story (1961), Neptune's Daughter (1949), The Ballad of Gregorio Cortez (1982), Stand and Deliver (1987), and others.

There are no critic reviews yet for Hispanic Hollywood. Keep checking Rotten Tomatoes for updates!

There are no featured audience reviews for Hispanic Hollywood at this time.