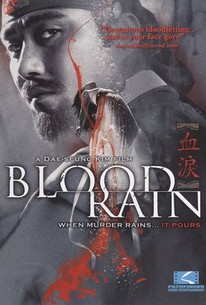 Mysterious and deadly events are filling the residents of the remote island of Donghwa with a sense of foreboding. A local shaman (Choi Ji-na) collapses during an annual ritual, and seems momentarily possessed by the spirit of Kang (Jeon Ho-jin), a local lord who was executed. Soon afterward, there's a massive fire on the docks just as the paper the island produces is being loaded to be sent to the mainland as tribute. When Lee Won-kyu (Cha Seung-weon) arrives from the mainland to investigate, he finds that the town drunk has been murdered and impaled. While he's investigating the two crimes, another grisly murder takes place, and Lee learns that the deaths mirror those suffered by Kang and four members of his family after Kang was accused of treason and of practicing Catholicism. While other residents of the island, including Kim In-kwon (Park Yong-woo of My Scary Girl), the son of another local lord, apparently try to stymie his investigation for political reasons, Lee digs deeper into Kang's execution, and finds a pit of corruption. At the center of the case is Doo-ho (Ji Seong), a talented artist who was an orphan when Kang took him in. As the body count mounts, Lee discovers that the victims were all informants who denounced Kang. While Lee methodically investigates the crime, the local residents grow increasingly fearful that their island is haunted by Kang's vengeful spirit. Blood Rain marks the second feature of director Kim Dae-seung (Bungee Jumping of Their Own). The film was shown at the 2006 New York Asian Film Festival, presented by Subway Cinema.

There are no critic reviews yet for Hyeol-ui nu (Blood Rain). Keep checking Rotten Tomatoes for updates!