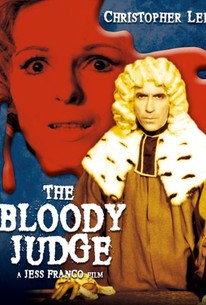 This erotic horror film from cult director Jesus Franco is based on the witch-hunting exploits of Lord Chief Justice Jeffreys (Christopher Lee), a real historical figure who died in prison in 1702 at the age of 54. In 1685 England, young Alicia Gray is burnt for witchcraft. Alicia's sister Mary (Maria Rohm) unwisely falls for Harry Selton (Hans Hass, Jr.), a rebel against King James II. After the rebels are defeated, Harry is captured by agents of Lord Chief Justice Jeffreys (Christopher Lee), who defends the crown by accusing its enemies of witchcraft. Also a captive, Mary tries to save her lover by surrendering herself to the cruel Judge, who takes perverse sexual pleasure in sadistic torture. The film revels in displays of whipping, sex, and chained women, but is difficult to evaluate otherwise due to the numerous different versions available, some with alternate endings. One version has Jeffreys hanged, then taken down and beheaded, while another has him watching a hanging from a window while a narrator reads his death sentence. There is also a third ending in which Jeffreys makes a confession to Harry's father, the Earl of Wessex (Leo Genn), before suffering a fatal heart attack. Franco used the character again, this time portrayed by Cihangir Gaffari (aka John Foster) in his 1972 film Les Demons. Howard Vernon, who plays the cruel executioner Jack Ketch here, took a heroic role in the sequel. ~ Robert Firsching, Rovi

Leo Genn
as Earl of Wessex
View All

There are no featured audience reviews for Il Trono di fuoco (The Bloody Judge) at this time.