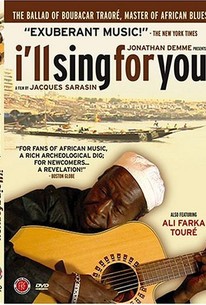 I'll Sing for You

I'll Sing for You Photos

In the early '60s, the West African nation of Mali was under French rule as its people struggled toward independence, and musician Boubacar Traoré became a star in his home country as its people dreamed of political freedom and better lives. Boasting a strong, blues-influenced voice and a hypnotic guitar style, Traoré -- better known as "Kar Kar" -- played music that showed the influence of the newer pop and rock sounds from Europe and the United States, and spoke of love and freedom in equal measure. However, at the height of his fame in Mali, Kar Kar disappeared; while he was a popular radio performer, he was unable to secure a record deal, and he was unable to support himself and his wife on his radio performance fees. Traoré became a tailor, and in time left Mali for self-imposed exile in Paris after the emotionally devastating death of his wife. Years later, a music producer who had heard recordings of Kar Kar's fabled radio performances offered him a chance to make an album, which led the artist back to Mali and the musical career he had abandoned. Je Chanterai Pour Toi is a documentary on Boubacar Traore's long road from fame to obscurity and back again, which features performances by both Traoré and fellow African guitar hero Ali Farka Toure.

Critic Reviews for I'll Sing for You

Audience Reviews for I'll Sing for You

There are no featured audience reviews for I'll Sing for You at this time.

I'll Sing for You Quotes