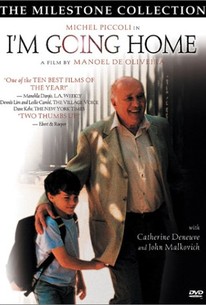 I'm Going Home is a masterfully subtle and poignant exploration of mortality.

A man who's been confronted with new responsibilities must decide what to do with his career in this drama with comic undertones. Gilbert Vance (Michel Piccoli) is an aging but highly respected actor who, after completing a performance of Eugene Ionesco's Exit the King in which he plays opposite an attractive and talented actress named Sylvie Leonor Silveira, receives devastating news -- his wife, his daughter, and her husband have all perished in an automobile accident. Vance becomes the guardian of his grandson, and as he learns to live without his loved ones, the boy soon becomes his best and most rewarding reason for getting through the days. Vance returns to work playing Prospero in a well-received production of William Shakespeare's The Tempest, and after the successful run, Vance's agent (Antoine Chappey) is flooded with offers for the actor's services. But the majority of the projects are highly dubious, and Vance ends up rejecting most of them, though he takes a role in a screen adaptation of James Joyce's Ulysses directed by American filmmaker John Crawford (John Malkovich), even though he knows he's miscast. As Vance ponders retirement, his agent also passes along another sort of offer -- Sylvie has confided that she's very much attracted to Vance, but while she's more than interested in an affair, Vance isn't sure that he wants a new relationship in his life. Catherine Deneuve also appears in a supporting role as an actress working with Vance. ~ Mark Deming, Rovi

Now Streaming: Master of None, Midnight in Paris, Air Force One, And More
View All

There are no featured audience reviews for I'm Going Home at this time.