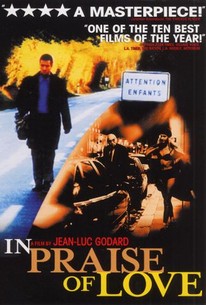 Jean-Luc Godard remains a challenging filmmaker with admirable ambition, but In Praise of Love is too self-indulgent and bereft of stylistic pleasure to engage beyond the auteur's most patient fans.

Cinematic iconoclast Jean-Luc Godard returns to the front ranks of contemporary filmmaking while embracing the digital video revolution (no great surprise, given his eager and early embrace of video technology in the 1970s) with this drama. In the first part of the film, shot on 35 mm black-and-white film, a filmmaker named Edgar (Bruno Putzulu) is in the midst of a casting session with his producers, looking for the leading lady for his next film. More interested in discussing philosophy than in the nuts and bolts of the character, Edgar speaks with a number of actresses before he encounters Elle (Cecile Camp); he's fascinated by her, and is certain he's met her somewhere before, but can't tell where or when. Eventually, Edgar decides Elle is the right person for the role, but he then discovers she has died. In the second part of the film, produced using color digital video equipment, Edgar flashes back to the moment when he first met Elle -- he's meeting with an elderly couple who survived the Holocaust and have sold their life story to a Hollywood movie producer. While meeting the couple as a guest of an old friend and historian (Jean Lacouture) interested in their story, he's introduced to the couple's granddaughter, a law student who has offered to take a look at their contract -- Elle.

Marceline Loridan Ivens
as Woman in Movie Theatre
View All

Critic Reviews for In Praise Of Love (Éloge de l'amour)

Audience Reviews for In Praise Of Love (Éloge de l'amour)