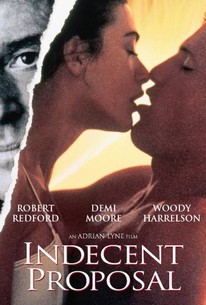 Lurid but acted with gusto, Indecent Proposal has difficulty keeping it up beyond its initial titillating premise.

Adrian Lyne buffs the premise of Honeymoon in Vegas to a fine gloss in this yuppie melodrama that poses the conundrum of whether the loving husband of an equally loving wife will accept $1 million to allow his wife to spend one night with a billionaire who looks like Robert Redford. All the cynics please take a number and form a line at the right. Demi Moore and Woody Harrelson play Diana and David Murphy, high-school sweethearts who marry and who are doing very well -- Diana is a successful real-estate agent, and David is an idealistic architect who has built a dream house by the ocean -- until the recession hits. Suddenly, David loses his job, and they can't make the mortgage payments. Dead broke, they borrow $5000 from David's father and head to Las Vegas to try to win money to pay the mortgage on their house. At first, they get $25,000 ahead -- but inevitably the house always wins, and they end up losing it all. While Diana is in the fancy casino boutique trying to lift some candy, she is spotted by billionaire John Gage (Robert Redford), who is immediately attracted to her. John invites Diana and David to an opulent party, and it is there that John offers David $1 million for a night with his wife. David is wracked by this moral dilemma, but Diana finally makes the decision on her own, with ensuing consequences for their ideal marriage and their bank account.

Richard B. Livingston
as Mike

Sheena Easton
as Herself

Herbie Hancock
as Himself
View All

The Weekly Ketchup: "Indiana Jones" Is Back, "National Treasure 2" Gets A Name, "Mr. & Mrs. Smith" To TV, And More!
One Early, Random Reaction to "The Departed"
Keanu & Zeta to Head Lyne’s Lana Turner Tale
View All