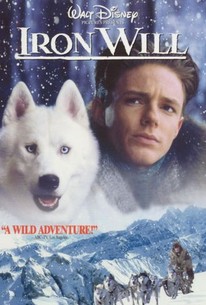 A rousing Disney dog-sled adventure based on a real life event -- a 522-mile dog-sled race between Winnipeg, Canada and St. Paul, Minnesota that occurred in 1917. When his father is accidentally killed, South Dakota farmboy Will Stoneman (Mackenzie Astin) decides to enter the dog-sled race in order to save his family from financial ruin. His mother (Penelope Windust) wants Will to use part of the prospective $10,000 race winnings for college, but Will just wants to save the farm. With the help of Indian handyman Ned Dodd (August Schellenberg), Will begins to train for the race. But the rich mogul underwriting the race, J.P. Harper (David Ogden Stiers), doesn't want Will to enter, thinking the competition too arduous and too dangerous for such a young boy. To Will's aid comes yellow journalist Harry Kingsley (Kevin Spacey), who convinces Harper to permit Will to enter the race. But Harry also has his own agenda -- he sees a great story in Will and thinks it will sell newspapers and advance his journalistic career. With his father's best dog Gus at the head of his dog team, Will is ready and determined to win the race. But Will discovers that winning the race is only half his battle. Dealing with the petty and malevolent human beings involved in the race -- in particular, the egotistical Scandinavian champion Borg Guillarson (George Gerdes) and the wealthy gambler Angus McTeague (Brian Cox) -- prove to be as much of a challenge to his mettle than any natural obstacles Will might encounter.

Mackenzie Astin
as Will Stoneman

Wayne A. Evenson
as Potter

Jim Olsen
as Mayor of Winnipeg

Critic Reviews for Iron Will

Audience Reviews for Iron Will