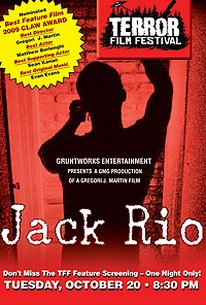 Shortly after the famous actor Tommy Jamison announces he is quitting his leading role on the mega-hit TV show Jack Rio, a crazed murderer goes on a gruesome killing spree. A wave of horror follows in Hollywood, as one by one the killer's victims are found with their faces hacked off. Journalist Andrea Shane (Meadow Williams), who is doing an investigative report on Jack Rio, quickly discovers a link between the murders and the show's coming demise. As the crisis pushes Tommy to the edge of insanity and investigators inch closer to solving the grisly murders, the audience can only hang on as JACK RIO's dizzying thrill ride builds to a shocking, must-see climax. An edgy thriller that keeps audiences in spine-tingling suspense, JACK RIO features an ensemble cast of familiar faces: Nadia Bjorlin (REDLINE, NBC's DAYS), Meadow Williams (APOLLO 13, LIGHT YEARS AWAY), Brian Krause (WB's CHARMED / Stephen King's SLEEPWALKERS), Sean Kanan (HACK!), Adrianne Curry (LIGHT YEARS AWAY, and the hit reality show MY FAIR BRADY) and Matthew Borlenghi (NBC's DAYS OF OUR LIVES ).

There are no critic reviews yet for Jack Rio. Keep checking Rotten Tomatoes for updates!

There are no featured audience reviews for Jack Rio at this time.