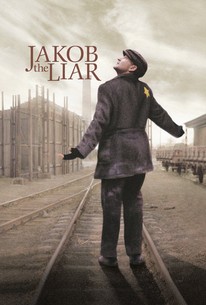 Any real story is buried by awkward performances and contrived situations.

This remake of the 1975 German film Jakob der Lügner stars Robin Williams in a dramatic role as a man who uses his active imagination to bring a ray of hope where hope was all but unknown. Jakob Heym (Robin Williams) is the owner of a small café during the Nazi occupation of Poland; he has little money and is struggling to keep body and soul alive in the shadow of the Third Reich. One day, he overhears a radio broadcast, forbidden to Polish ears, that reports a major victory for Russian troops over the German army. Enthusiastic about this good news, Jakob begins spreading word of the Russian army's progress through the Polish ghetto. He notices that the story gives people hope and makes it easier for them to get through the day. So Jakob begins inventing stories and passing them along, creating fictional war reports that suggest that the occupation may soon be ending. However, when the occupation troops get wind of these stories, they become convinced that someone has communications equipment stashed away somewhere, and they're determined to find both the radio and its operator at all costs. Jakob the Liar was the first American feature for director Peter Kassovitz; the supporting cast includes Armin Mueller-Stahl, Alan Arkin, Bob Balaban, and Liev Schreiber.

Adam Rajhona
as The Whistler

News & Interviews for Jakob the Liar

Total Recall: I Am Legend and the Work of Richard Matheson
Weitz Checks "Compass" and Returns to Fantasy
View All

Critic Reviews for Jakob the Liar

Audience Reviews for Jakob the Liar