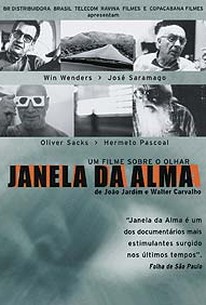 Brazilian filmmakers Joao Jardim and Walter Carvalho ponder the old adage "the eyes are the windows to the soul" as they explore vision and perception in their 2002 documentary A Janela Da Alma (Window of the Soul). Beginning with an interview with Brazilian jazz musician Hermeto Pascoal, Carvalho and Jardim attempt to make sense of how the musician perceives his world with a pair of impaired eyes that appear to simultaneously look in different directions. From there, the Brazilian co-directors interview a number of famous subjects with varying degrees of ocular health, ranging from the non-vision impaired director Wim Wenders to blind photographer Evgen Bavcar, while both the filmmakers and the interview subjects ponder how their lives and existences would be different had their abilities or inabilities to see the world around them been different. Released in Brazil in the summer of 2002 to mixed reviews, A Janela Da Alma was screened at a number of film festivals around the world in late 2002 into early 2003. ~ Ryan Shriver, Rovi

There are no critic reviews yet for Janela da Alma. Keep checking Rotten Tomatoes for updates!

There are no featured audience reviews for Janela da Alma at this time.