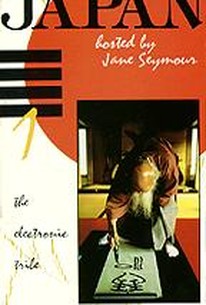 More so than many cultures, Japan is bound by tradition, and yet its people also create and embrace innovative technologies. Hosted by Emmy and Golden Globe winner Jane Seymour, this is the first volume in a four-part PBS documentary series that seeks to explain modern Japan and predict its future by referring to the Asian nation's history and ancient culture. This episode provides a look at how traditional social structures have served Japanese culture well in the modern business era and at points of friction between the island society's ancient mores and high-tech ambitions.

There are no critic reviews yet for Japan, Vol. 1: The Electronic Tribe. Keep checking Rotten Tomatoes for updates!

There are no featured audience reviews for Japan, Vol. 1: The Electronic Tribe at this time.