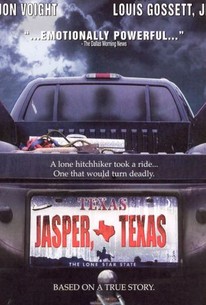 The time: June 1998. The place: The sleepy town of Jasper, TX. Three young, self-styled white supremists overpower a 49-year-old black man named James Byrd Jr., chain him to the back of their pickup, and literally drag him to death. What follows is a media firestorm, exacerbated by scores of network and cable-TV news services, the grim pronouncements of so-called pundits, and the intrusion upon Jasper of several extremist activists, ranging from members of the Ku Klux Klan to the newly formed Black Panthers. As the frenzy continues, the heretofore peaceful, if somewhat tenuous, relationship between the white and black residents of Jasper is severely strained, with echoes of past racism resounding throughout the area. In the center of the controversy are two decent, hard-working public servants: R.C. Horn, the first black mayor of Jasper, and Billy Rowles, the town's white sheriff. Also profoundly affected by the appalling murder of Byrd are the respective parents of the victim and the killers. Happily, when the dust clears, justice is done (two of the murderers are condemned to death, the third sentenced to life imprisonment), and, instead of being wrenched apart, the black and white communities of Jasper draw closer together than they have ever been. Made for cable TV, this feature-length reenactment stars Louis Gossett Jr. as Horn and Jon Voight as Rowles. Although certain liberties are taken (the actor playing Byrd is clearly much younger than his real-life counterpart and the Black Panthers and KKK are incorrectly shown descending upon Jasper the same day), the film is, by and large, accurate. Better still, there is a minimum of preaching and proselytizing. Previewed at the Philadelphia Film Festival, Jasper, Texas was given its official Showtime network cable premiere on June 8, 2003 -- almost five years to the day after Byrd's death.

There are no featured audience reviews for Jasper, Texas at this time.