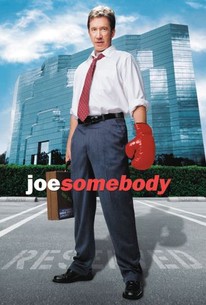 Amiable, but extremely lightweight and predictable.

Following their television series Home Improvement and the features The Santa Clause (1994) and Jungle 2 Jungle (1997), the actor/director team of Tim Allen and John Pasquin collaborate once again on this high-concept comedy. Allen stars as Joe Scheffer, a nice guy video specialist for a Minneapolis pharmaceutical company who's plodding through both his thankless job and an unhappy divorce from his ex-wife Callie (Kelly Lynch). When Joe brings his daughter Natalie (Hayden Panettiere) to the office with him on Take Our Kids to Work Day, he's humiliated in a spat with company bully Mark McKinney (Patrick Warburton) over a parking space. It's the last straw for the mild-mannered Joe, who challenges McKinney to a rematch, hires a has-been action movie star (Jim Belushi) to instruct him in martial arts, and pays a stylist to make over his wardrobe and hair. As Joe's image improves and the big day approaches, he finds his new self-respecting stance has positive effects in both the workplace, as he lands a long-overdue promotion, and in his romantic life, as both Callie and a cute "wellness coordinator" (Julie Bowen) start warming up to him. The levelheaded Natalie, however, seems to prefer the previously non-confrontational dad she already loved. Joe Somebody (2001) is the feature debut of screenwriter John Scott Shepherd, who actually worked as a corporate filmmaker in Minneapolis. ~ Karl Williams, Rovi

John Riedlinger
as In Crowd Guy No. 1

Bill McCallum
as In Crowd Guy No. 2

Gavin Lawrence
as In Crowd Guy No. 3

Jim Labriola
as Guy at Fight

Shawn Judge
as Woman No. 1

Lowell Sanders
as Guy at Fight No. 2

Rob Cowin
as Guy at Fight No. 3

Jesse Ventura
as Himself

Critic Reviews for Joe Somebody

Audience Reviews for Joe Somebody