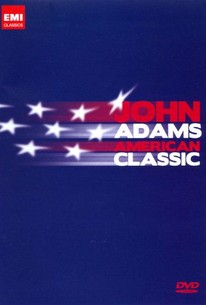 From the earliest stages of his career well into the 21st century, operatic composer John Adams exuded a unique, inimitable style, and a fearlessness that prompted him to capture the political and cultural zeitgeist of contemporary America in his music, with works that tackled such hot-button issues as terrorism and imperialism. Along the way, Adams forged meaningful, ongoing collaborative relationships with diverse musical giants including Peter Sellars, Alice Goodman and Dawn Upshaw. As produced by Jane Seymour and directed by David Jeffcock, this documentary marks one of the first to chronicle Adams's life; it takes a long and up-close look at controversial works he created including the operas +Nixon in China and +The Death of Klinghoffer, and features candid discussion with a number of Adams's collaborative partners.

There are no critic reviews yet for John Adams: American Classic. Keep checking Rotten Tomatoes for updates!

There are no featured audience reviews for John Adams: American Classic at this time.