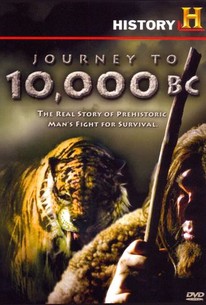 Per its title, the History Channel documentary Journey to 10,000 B.C.: The Real Story of Prehistoric Man's Fight for Survival carries viewers on a sweeping trip through the prehistoric era to glimpse how ancient men lived, functioned and struggled to survive. The producers of this film created the documentary as a nonfiction companion piece to the big-budget Hollywood actioner 10,000 B.C. (2008), directed by Roland Emmerich. Here, director David Pardusch paints the period around 10,000 B.C. as an era of intense change, manifest in the gradual extinction of species such as the sabretooth tiger and the woolly mammoth from the face of the Earth, the encroachment of a global ice age, and the gradual and deliberate appearance of homo sapiens on the North American continent. Pardusch also ties the emergence of human beings - who relied on prehistoric mammals for food and clothing - to the extinction of those great beasts. The program travels to archaeological dig sites, where it unearths evidence of how the ancients lived, and also recreates that era onscreen, with vivid CG animations.

There are no critic reviews yet for Journey to 10,000 B.C.. Keep checking Rotten Tomatoes for updates!

There are no featured audience reviews for Journey to 10,000 B.C. at this time.