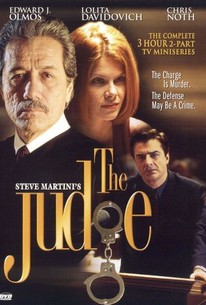 Based on the 1996 novel by Steve Martini, this two-part TV miniseries stars Edward James Olmos as by-the-book Judge Armando Acosta, who regards both criminals and cops with equal disdain. During Acosta's investigation of police corruption, the Judge is framed for soliciting a prostitute -- who is subsequently murdered. Thus it is that Acosta finds his career, and possibly his life, in the hands of defense attorney Paul Madriani (Chris Noth), with whom the Judge has often crossed swords in court, even unto jailing Madriani for contempt. As the trial proceeds, Acosta and Madriani discover that, though they are frequently on opposite sides of the legal system, the two men are more "alike" than they'd care to admit. Steve Martini's The Judge aired over NBC on May 6 and 7, 2001.

There are no critic reviews yet for Steve Martini's 'The Judge'. Keep checking Rotten Tomatoes for updates!

There are no featured audience reviews for Steve Martini's 'The Judge' at this time.