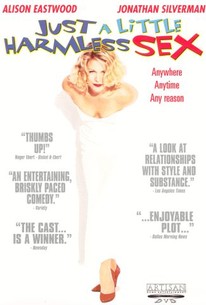 Love, sex, fidelity, and the nearly endless variety of complications they can bring are played for laughs in this sophisticated comedy. Alan (Robert Mailhouse) is driving home on a dark and rainy night when he sees an attractive woman standing by the side of the road. He stops and offers her a ride; she accepts and immediately offers him fellatio for his troubles. Though Alan is married and has never cheated on his wife, he's not sure how to say no in this instance, but he doesn't get much of a chance to enjoy infidelity before he's interrupted by the police -- who inform him he's picked up a prostitute and he's under arrest. Several days later, Alan is trying to figure out how to get his wife Laura (Alison Eastwood) to take him back. His buddies Danny (Jonathan Silverman) and Brent (William Ragsdale) chide him for his naivete and advise him to stick by the old rationalization that oral sex isn't really sex. Meanwhile, Laura heads out for a night on the town with her friends Ally (Kimberly Williams) and Terianne (Jessica Lundy). Laura is thinking that adulterous turnabout might be fair play, Ally is mulling over her secret fantasy of becoming an exotic dancer, and Terianne is looking for a man who can help her with her problems in reaching an orgasm. The supporting cast includes Lauren Hutton as Laura's mother.

Keith Coogan
as Loudmouth
View All

There are no featured audience reviews for Just a Little Harmless Sex at this time.