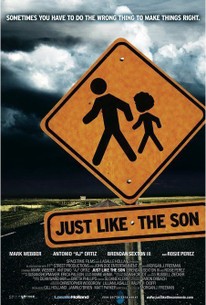 A petty criminal's attempt to turn his life around takes both him and a young boy on an unexpected journey in this independent drama. Twentysomething Daniel Carter (Mark Webber) has been in trouble with the law ever since he was a kid, and his latest misadventure has led him to performing community service at a grade school in the East Village. Daniel strikes up a close friendship with one of the students he's working with, Boone (Antonio Ortiz), an eight-year-old who has shown surprising resilience despite a blighted home environment. When Boone doesn't show up for school one day, Daniel asks some questions and learns his mother has become seriously ill and a foster family has taken him in. Boone is eventually put up for adoption, and Daniel hopes to gain custody of the boy, convinced helping the boy will give him a chance to turn his life around. However, his age and criminal record make Daniel an unfit father in the eyes of the court, and when Daniel's father refuses to help, he has a brainstorm -- Boone has mentioned that he has an older sister in Dallas, so Daniel snatches the boy from his foster parents and hits the road for Texas, planning to reunite Boone with his family. Just Like the Son received its world premiere at the 2006 Tribeca Film Festival.

There are no featured audience reviews for Just Like The Son at this time.