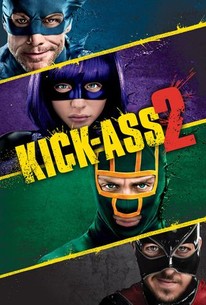 Kick-Ass 2 falls short in its attempt to emulate the original's unique blend of ultra-violence and ironic humor.

His heroic antics having inspired a citywide wave of masked vigilantes, Kick-Ass (Aaron Taylor-Johnson) joins their ranks to help clean up the streets, only to face a formidable challenge when the vengeful Red Mist (Christopher Mintz-Plasse) transforms himself into the world's first super villain in this sequel written and directed by Jeff Wadlow (Never Back Down). Dave/Kick-Ass and Mindy/Hit Girl (Chloë Grace Moretz) are about to graduate high school and become a crime-fighting duo when their noble plans are foiled by Mindy's strict parents. Now, as Mindy hangs up her Hit Girl uniform and navigates the treacherous high-school social scene, Kick-Ass begins patrolling the streets with Justice Forever, a fearless group of urban watchdogs fronted by former mob thug Colonel Stars and Stripes (Jim Carrey). They've got the criminal element on the run when Chris D'Amico lays his Red Mist persona to rest, and reemerges as The Mother F**ker, a powerful criminal mastermind with a loyal legion of henchmen. The Mother F**ker is determined to avenge the death of his late father, who previously perished at the hands of Kick-Ass and Hit Girl. Now, as The Mother F**ker and his minions begin targeting the members of Justice Forever, Hit Girl realizes that the only way to save Kick-Ass and his new friends is to emerge from her forced retirement, and fight back with everything she's got. John Leguizamo, Donald Faison, Morris Chestnut, and Robert Emms co-star. ~ Jason Buchanan, Rovi

Paul Raposo
as Guido No. 1

David Vena
as Guido No. 2

Chuck Liddell
as Himself

Andy Nyman
as The Tumor

Todd Boyce
as Chief of Police

Mif
as Convict No. 1

Rob Archer
as Convict No. 2