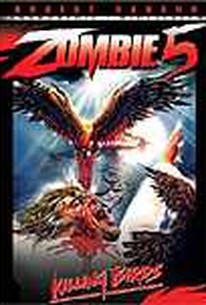 When a shell-shocked Vietnam veteran brutally murders his wife, her lover, his parents, and the pet bird, the terror is only beginning in Joe D'Amato and Claudio Lattanzi's horrific sequel to the Lucio Fulci classic Zombie. Years after the savage slaughter, an elite team of scientists studying the mating habits of rare birds in the same area encounter a malevolent blind man with a flock of vicious, bloodthirsty birds. As the team attempts to escape the cursed forest, the dead begin to rise and an unspeakable evil descends from the sky to rip the souls from the living. ~ Jason Buchanan, Rovi

There are no critic reviews yet for Killing birds - uccelli assassini (Zombie 5: Killing Birds)(Dark Eyes of the Zombie)(Raptors). Keep checking Rotten Tomatoes for updates!

There are no featured audience reviews for Killing birds - uccelli assassini (Zombie 5: Killing Birds)(Dark Eyes of the Zombie)(Raptors) at this time.