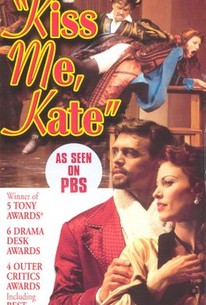 One of the biggest hits of the 1948-1949 Broadway season, the classic Cole Porter musical +Kiss Me, Kate was triumphantly revived in 2000, running over 881 performances in New York and winning a Tony Award in the process. This faithful-to-its-source TV production of the "new" +Kiss Me, Kate was taped during several live performances at London's Victoria Palace. The story concerns the efforts by an egocentric but likable actor, Fred Graham (Brent Barrett), to stage a musical version of William Shakespeare's +The Taming of the Shrew. Hoping to boost the show's box-office value, Graham has cast his temperamental ex-wife, film star Lilli Vanessi (Rachel York), in the role of the shrewish Katharine. As the production unfolds during a tryout in Baltimore, Fred and Lilli discover that they can't live with each other and can't live without each other -- just like Petruchio and Kate in +Taming of the Shrew. Other ingredients in this heady blend of modern showbiz savvy and classic Elizabethan theater are the play's second leads, chronic gambler Bill Calhoun (Michael Berresse); the incurably flirtatious Lois Lane (Nancy Anderson); Lilli's current fiancé, the pompous Harrison Howell (Nicolas Colicos), a boring Republican millionaire in the original play, here rewritten as a lampoon of General Douglas MacArthur; and a brace of Runyonesque gangsters (Jack Chissick, Teddy Kempner) who refuse to leave the theater until they can collect a 75,000-dollar gambling debt. All of the great Cole Porter songs are performed intact and con brio: "Another Opening, Another Show," "So in Love," "Faithful in My Fashion," "I Hate Men," "Tom, Dick and Harry," "Too Darn Hot," "Brush Up Your Shakespeare" "Why Can't You Behave?" and so on. As a bonus, Porter's "From This Moment On," not written for the 1948 theatrical version of +Kiss Me, Kate, but performed in the 1954 movie version, is herein revived to give poor old Harrison Howell something to do besides get laughs. Michael Blakemore, who adapted and staged the 2000 revival, also oversees this irresistible TV version, which first aired in the U.S. courtesy of PBS.

Critic Reviews for Kiss Me, Kate

Audience Reviews for Kiss Me, Kate

There are no featured audience reviews for Kiss Me, Kate at this time.