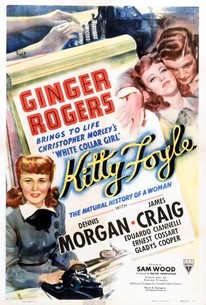 Though Ginger Rogers' starring vehicles always turned a profit for RKO Radio, many filmgoers thought of Rogers only in terms of "Fred Astaire's partner." Others considered her a delightful comedienne, but no great shakes as a dramatic actress. Thus it was both a personal and professional triumph when Ms. Rogers walked home with an Oscar for her performance in Kitty Foyle. Based on Christopher Morley's Story of an American Girl, the film, told in flashback, relates the progress of working-girl Kitty Foyle (Ginger Rogers) as she pursues her Cinderella dreams. While employed at a department store, Kitty is wooed by Dennis Morgan, scion of a wealthy Philadelphia family. She flirts with the notion of marrying Morgan for his money, but decides that he's a bit too weak-willed for her tastes. Kitty enters into a romance with poor-but-dedicated doctor James Craig, then does an about-face by accepting Morgan's proposal. She quickly runs afoul of Morgan's snobbish family, who are so tightly bound by centuries-old tradition that Kitty is moved to exclaim "You mean to say you let all those dead people tell you what do?" She walks out on Morgan, then discovers that she's pregnant. Even after the trauma of delivering a stillborn child, Kitty is too proud to go back to Morgan. When true-blue Craig comes back into her life, Kitty, repeating her favorite phrase "By Judas Priest!", decides to forego money for love. Though successful to the tune of an $860,000 profit in 1940, Kitty Foyle seems stilted and over-rehearsed when seen today, save for the refreshing spontaneity of Ginger Rogers' performance. The film's best scene is the opening montage of the American Woman's "progress" once she enters the workplace (an uncredited Heather Angel is the central character in this delightful pantomimic vignette). Featured in the cast of Kitty Foyle is director Sam Wood's daughter Katherine Stevens, better known as K.T. Stevens. ~ Hal Erickson, Rovi

Heather Angel
as Girl in Prologue

Tyler Brooke
as Boy in Prologue

Helen Lynd
as Girl in Elevator

Julie Carter
as Girl in Elevator No. 2

Renee Haal
as Shopgirl in Elevator

Mary Currier
as Clerk at Delphine's