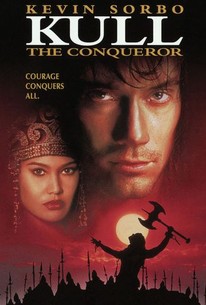 Like his other creation "Conan the Barbarian, 1930s, pulp-fiction writer Robert E. Howard's "Kull the Conqueror" is an often scantily clad, long haired and muscular hero of sword and sorcery adventures. A wandering warrior and former slave, Kull (beef-cake Kevin Sorbo, the star of the popular syndicated TV series Hercules in his feature film debut) arrives in the kingdom of Valusia and through a series of fateful twists becomes its new king. The people are happy, Kull is happy, and so is the feisty slave-girl/seer Zareta Karina Lombard who secretly loves him. The recently re-awakened wicked sorceress Akivasha (Tia Carrerre, who gives a delicious performance as the evil temptress), however, is most unhappy, for she wants to reclaim the kingdom for herself. Using all her wily womanly ways, Akivasha seduces Kull into marriage and sets her plans in motion. When Kull learns the truth about his bride, he knows he must destroy her. The only way to do it, however, is to sail to steal the icy breath of Valka, a cave-dwelling northern god. Armed with this knowledge, Kull, Zareta and her priestly brother Ascalante Litefoot sail off on an exciting, dangerous quest that will lead them to tangle with strange creatures and villains. A bright and colorful adventure Kull the Conqueror, like its predecessor Conan the Barbarian (the film that made Arnold Schwarzenegger a star), is filled with violence, sex, silly dialogue and plenty of well-oiled, exposed flesh. But unlike the elaborate, big budgeted Conan, Kull is a smaller, perhaps more self-conscious venture. The special effects seem deliberately cheesy, the violence is cartoonish, and none of the actors seems to be taking him or herself too seriously, all of which serves to give Kull the feeling of an old-fashioned Saturday afternoon matinee (albeit for older audiences as there is one steamy sex scene, and some parts that could frighten small children).

Critic Reviews for Kull the Conqueror

Audience Reviews for Kull the Conqueror