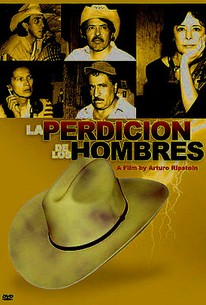 Arturo Ripstein's black comedy takes its title from a Mexican song about women as the downfall of men. Partitioned into four long scenes, the first sees a badly executed murder in which two killers ambush their victim, stone him to death, and use his wheelbarrow to tow away the body. The film then shifts its location to a crumbling police station where the wives of the bigamous murder victim have come to detail their grievances against their departed husband, and also to lay claim to his body. Eventually a coin is flipped to determine who will get the corpse, but the winner (Patricia Reyes Spindola, a Ripstein regular) starts to feel suckered by the other wives once funeral costs pile up. After a good deal of ranting to her oblivious, Nintendo-fixated daughter, the widow unwittingly enlists the help of one of the killers to transport her husband's body home. En route, she realizes the killer is wearing her husband's boots and duly attacks him with a baseball bat, taking back the boots and forcing the shoeless murderer to suck her toes in penance as her daughter looks on in disgust. The film then flashes back to the two days preceding the murder, when the dead man played on a losing baseball team with his killers; thus is revealed the true reason for his murder. La Perdicion de Los Hombres premiered at the 2000 San Sebastian Film Festival, where it won the festival's Golden Shell for "Best Film." ~ Rebecca Flint Marx, Rovi

There are no featured audience reviews for La Perdicion de los Hombres at this time.