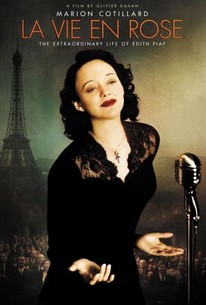 The set design and cinematography are impressive, but the real achievement of La Vie en Rose is Marion Cotillard's mesmerizing, wholly convincing performance as Edith Piaf.

Writer/director Olivier Dahan (Crimson Rivers II) helmed La Vie en Rose, the screen biopic of tragic French songstress Edith Piaf. Marion Cotillard portrays Piaf, the superstar once raised as a young girl by her grandmother in a Normandy bordello, then discovered on a French street corner -- as a complete unknown -- by cabaret proprietor Louis Leplée (Gérard Depardieu). The film segues breezily between various episodes from Piaf's life -- such as her lover, French boxer Marcel Cerdan's (Jean-Pierre Martins) championship bout in mid-'40s New York; her period in Hollywood during the '50s; Piaf's abandonment as a young girl by her contortionist father (and earlier by her mother, a street singer); her brushes with the law as an adult; and her 1951 car accident and subsequent morphine addiction that caused her to age well beyond her years and left her barely mobile; and, through it all, her ability (like Billie Holiday) to funnel personal tragedy and emotional struggles into her vocalizations -- dazzling audiences in the process. ~ Nathan Southern, Rovi

Robert Paturel
as Man On Corner

Philippe Bricard
as Man At Lannes

Vladimír Javorský
as Spectator In Street

Sylvie Guichenuy
as Woman In Street

Maya Barsony
as Girl In Bar

Robert Nebrenský
as Doctor At Dreux