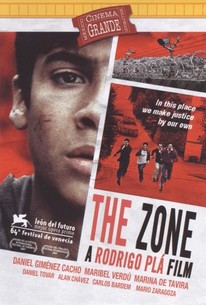 A slick and smart Mexican thriller of middle-class panic and vigilantism, that is lean, mean and often shocking.

At a time when the growing chasm between the rich and the poor appears to be slowly tearing Mexico - and many other Latin countries - apart, first time filmmaker Rodrigo Plá highlights just how isolationism breeds fear in many wealthy communities. Alejandro (Daniel Tovar) lives with his father Daniel (Daniel Giménez Cacho) and his mother Mariana Maribel Verdú) in an isolated community known as La Zona. La Zona is home to the most privileged citizens in Mexico, but with all of the gates and closed circuit cameras it feels more like a million dollar prison than a typical neighborhood. Eventually, a group of disadvantaged teenagers manage to break into La Zona. As the members of the community scramble to protect their families at any cost, one of the teenaged burglars, a frightened boy named Miguel (Alan Chávez), seeks cover in the basement of Alejandro's home as his friends scatter. Later, when Alejandro discovers the young fugitive, the privileged boy's growing empathy for the petty thief and murder suspect leads him to question the values imposed on him by his father as well as the many other isolationists who have taught him to fear his fellow countrymen.