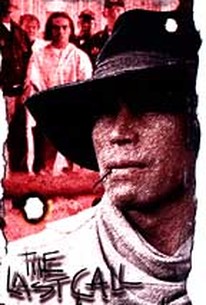 A thespian's greatest role becomes a tragic parallel to real life in this drama. Gilberto Cortes (Alberto Estrella) is a Mexican actor who is raising a young son, Mario (Imanol), on his own. After years of struggle, Gilberto is beginning to achieve success in a play called "The Black Flag," in which he plays a father trying to spare his son's life after the young man is sentenced to death. While Gilberto's star begins to rise, Mario is emotionally scarred after he falls victim to a child molester, and the boy is never the same again. After leaving home in his teens, Mario (now played by Abraham Ramos) relocates to Texas, where he begins attending college. Difficult circumstances befall Mario, and he is convicted of a crime that carries the death penalty in Texas, and Gilberto finds he must reenact in real life the role he perfected on stage -- that of a father pleading for the life of his son. ~ Mark Deming, Rovi

There are no critic reviews yet for Last Call. Keep checking Rotten Tomatoes for updates!

There are no featured audience reviews for Last Call at this time.