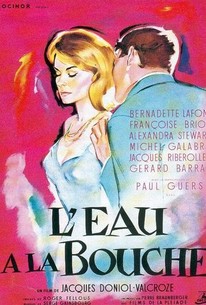 In this standard comedy of sex and odd manners, a few men and women converge on a picturesque chateau for the reading of a will and then start pairing off. One of the women lives with her successful photographer-boyfriend, and she arrives at the chateau because she is supposed to have inherited something. Before too long, she has fallen for the lawyer reading the will. In the meantime, her boyfriend arrives in the guise of her brother, and he is attracted in a big way to his girlfriend's cousin. So while she goes after the lawyer, he is occupied with his own pursuits. The maid in the chateau, in turn, is undecided about whether to accept the romantic overtures of a young valet. There are a few potholes in these roads to romance, but given the tone of the proceedings they are not likely to cause serious damage. ~ Eleanor Mannikka, Rovi

Paul Guers
as Jean-Paul
View All

There are no critic reviews yet for L'eau à la bouche (A Game for Six Lovers). Keep checking Rotten Tomatoes for updates!

There are no featured audience reviews for L'eau à la bouche (A Game for Six Lovers) at this time.