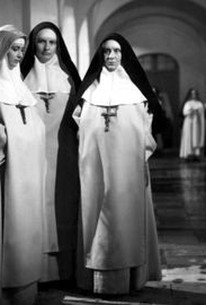 French filmmaker Robert Bresson completed his first feature, Les Anges du Peches, in 1943. Six years later, the film made its U.S. debut as Angel of the Streets. Attaining financing for his film by collaborating with famed playwright Jean Giraudoux, Bresson offers a knowing portrait of novitiate nun Anne-Marie, played by Renee Faure. Before she can truly give her life over to God, the girl must conquer her own sense of pride. This is accomplished in part when Anne-Marie comes to the aid of a jailed felon, played by Jany Holt. Establishing a precedent that he'd follow in his later films, Bresson utilizes nonprofessionals in the leading roles. Whenever the acting skills of the amateurs aren't up to the demands of the story, the director "acts" with his camera, conveying his character's emotions via carefully chosen camera angles and adroit editing. The only "name" player in the film is Sylvie, later the star of That Shameless Old Lady (1962). In some markets, Angel of the Streets was distributed as Angel of Sin.

Sylvie
as The Prioress

There are no featured audience reviews for Les Anges du Péché at this time.