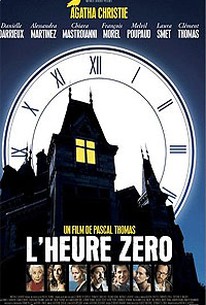 By the Pricking of My Thumbs director Pascal Thomas returns to the written word of Agatha Christie for inspiration, and the result is a lively whodunit centering on a deadly family gathering and the exquisite sleuthing skills of hyper-perceptive crime-fighter Superintendent Bataille. For the past twenty-odd years, elderly dowager Camilla Tresillian (Danielle Darrieux) has maintained a quiet existence in her sprawling mansion, where her every need is attended to by professional caretaker Marie-Adeline (Alessandra Martines) and stern-eyed personal maid Barrette (Carmen Durand). The familiar silence of Camilla's world is suddenly interrupted, however, when a series of relatives including her spendthrift nephew Guillaume (Melvil Poupaud) and his second wife Caroline (Laura Smet) are summoned to her mansion for a long overdue family gathering. Much to the Guillaume's dismay, his first wife Aude (Chiara Mastroianni) is also on the guest list, as is worldly adventurer Thomas Rondeau (Clement Thomas), who has always carried a torch for the pretty divorcée. Likewise, notorious ladies man Fred Latimer (Xavier Thiam) turns up casting a longing gaze at Caroline, and as the rest of the guests begin to arrive it becomes increasingly apparent that they all anticipate a hearty inheritance from their increasingly frail host. When Judge Trevoz (Jacques Sereys), a special guest of Camilla's, becomes the first victim in a painstakingly planned double homicide, it begins to appear as if Guillaume's greed has finally gotten the best of him. As with most well executed crimes, however, the truth is a far cry from initial appearances and fortunately Superintendent Bataille just so happens to be vacationing in the region. Now, as the clue-sniffing sleuth and his policeman nephew interrupt Camilla's party in hopes of ferreting out a killer, it quickly becomes apparent that everyone in the mansion has a motive for murder. ~ Jason Buchanan, Rovi

There are no featured audience reviews for L'Heure zéro, (Towards Zero) at this time.