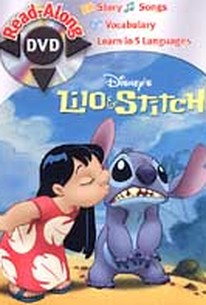 This special Read-Along DVD presents LILO AND STITCH so that children can read and sing along in five different languages, all while learning new words with the help of the disc's vocabulary aid:Far, far away, on an alien planet, a rogue scientist named Jumba has created a bright blue creature called Experiment 626, through illegal genetic research. This new creature loves destruction and chaos; he's considered dangerous enough to be exiled to a deep space lockup. But 626 steals a spaceship and escapes, touching down in Hawaii, where he ends up in a dog pound. He's adopted by Lilo, a spunky young girl, who renames her new pet "Stitch."Stitch turns out to be quite a handful--his destructive impulses are on full display as he trashes Lilo's house, among other naughty acts. Lilo is being raised by her older sister Nani (their parents died in an accident), and they are under surveillance by an evil social worker, Cobra Bubbles, who wants to take Lilo away from Nani. Lilo must tame Stitch, or his bad behavior could be held against Nani by Cobra. Meanwhile, Stitch is being pursued by his creator Jumba, who has followed him to Earth to try to recapture him. But Stitch becomes steadily more thoughtful and well-behaved as he grows to love Lilo and becomes a part of her family. The film's animation is done in the traditional 2-D style, complete with beautifully drawn watercolor backgrounds which give it a dreamy, colorful handcrafted appeal.

There are no critic reviews yet for Lilo and Stitch: DVD Read-Along. Keep checking Rotten Tomatoes for updates!

There are no featured audience reviews for Lilo and Stitch: DVD Read-Along at this time.