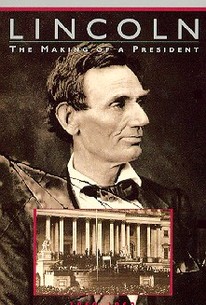 Lincoln: The Making of a President, 1860-1862 Ratings & Reviews Explanation

A shrewd politician, Abraham Lincoln had the intelligence, ambition, and principles to grow into his job as president. This is the first of four videos in the Lincoln series, which originally aired on PBS. Produced and directed by Peter W. Kunhardt, this program is narrated by renowned actor James Earl Jones, and features award-winning actor Jason Robards reading from letters, speeches, and diaries. Highlights include period photographs. The other three programs in the series are titled Lincoln: The Pivotal Year, 1863, Lincoln: I Want to Finish This Job, 1864, and Lincoln: Now He Belongs to the Ages, 1865.

Dabney Coleman
as Stephen A. Douglas

There are no critic reviews yet for Lincoln: The Making of a President, 1860-1862. Keep checking Rotten Tomatoes for updates!

There are no featured audience reviews for Lincoln: The Making of a President, 1860-1862 at this time.