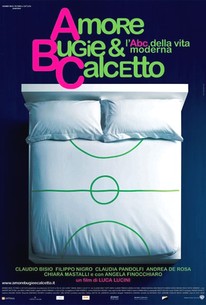 Seven men set aside the stresses and responsibilities of their life once a week to play soccer in this comedy-drama from director Luca Lucini. Vittorio (Claudio Bisio) is a guy in his mid-fifties who is trying to regain his fading youth with his young girlfriend Viola (Chiara Mastalli) while struggling to maintain a civil relationship with his ex-wife Diana (Angela Finocchiaro), a gifted surgeon. Lele (Filippo Nigro) is trying to keep his marriage to Silvia (Claudia Pandolfi) from falling apart after twelve years together, but the odds seem to be against him. Vittorio's son Adam (Andrea Bosca) is in his mid-twenties, and as he grows older he sees himself turning into the father he's never understood. Piero (Andrea De Rosa) is not sure what to do with his life as he anticipates his wedding to Viola's friend Martina (Marina Rocco). Filippo (Pietro Sermonti) is aggressive and cynical, always looking for an excuse to take advantage of others. Venezia (Max Mazzotta), who works with Vittorio, is a quiet man whose frequent silence disguises his intelligence and common sense. And Mina (Giuseppe Battiston) is a divorced writer with a sentimental streak and a stubborn addiction to cigarettes. Every Thursday evening, these men get together to play football with an amateur soccer league, and as they search for clarity and a sense of escape in sport, they also turn to one another as they deal with their crises. Amore, Bugie e Calcetto (aka Love, Soccer and Other Catastrophes) received its North American premiere at the 2008 Montreal World Film Festival. ~ Mark Deming, Rovi

There are no critic reviews yet for Love, Soccer and Other Catastrophes (Amore, bugie e calcetto). Keep checking Rotten Tomatoes for updates!

There are no featured audience reviews for Love, Soccer and Other Catastrophes (Amore, bugie e calcetto) at this time.