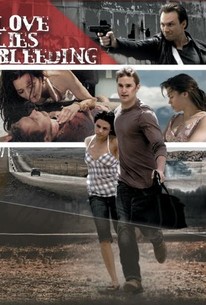 Christian Slater comes back for another round of that old True Romance in this tale of two young lovers who set out on the lam after discovering a substantial cache of dirty money. Duke is a hapless Iraq War veteran who just can't seem to pull his life together after returning home. While his love for pretty girlfriend Amber runs deep, there seems to be something just beyond reach that's keeping him from making the transition from soldier to civilian. When Duke stumbles onto the scene of a botched drug deal and notices a large duffel bag overflowing with cash, he picks up Amber, stops off for a quick wedding, and hits the road with a bag full of bills and a beautiful new bride. At first it seems like nothing can stop this young couple from conquering the world, but someone is missing that money, and he's determined to get it back. Pollen (Slater) is a corrupt DEA agent who is willing to kill in order to reclaim the cash he believes is rightfully his, and chances are he'll slay this young couple even if they agree to give it back. With time running out and Pollen closing in, Duke and Amber will be forced to outrun and outwit a madman that has all the resources needed to track them anywhere they run to.

Edward A. Duran
as Gangbanger

Mike Miller
as Justice of the Peace