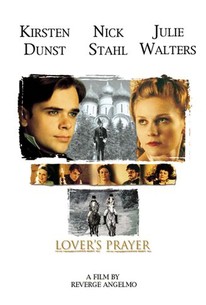 A boy learns a painful lesson about the ways of the heart in this period drama set in the 19th century. Vladimir (Nick Stahl) is a naive young man whose family is neither poor nor especially well off. While spending the summer in the country before going away to college, Vladimir is hired as a page for the wealthy family next door, whose matriarch is a middle-aged princess with a severe drinking problem and failing health. The princess has a lovely teen-aged daughter, Zinaida (Kirsten Dunst), and Vladimir soon becomes deeply infatuated with her. Vladimir hopes to somehow win Zinaida's heart, but she has a large circle of admirers, many of greater wealth, social position, and confidence than himself. While Vladimir becomes close friends with Zinaida, he isn't sure how to move their relationship to the next level, and the young man is crushed when he discovers one of his rivals for her affections happens to be his own father. Produced under the title All Forgotten, Lover's Prayer also stars Julie Walters and James Fox.

Nada Kreclova
as Maid
View All

There are no featured audience reviews for Lover's Prayer at this time.