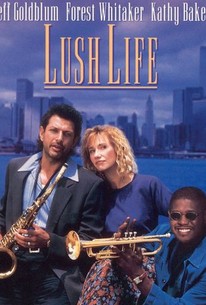 Jazz great Billy Strayhorn wrote the song which gives this film its title, "Lush Life". This film will be an especial treat to afficianados of jazz in all its forms. The story concerns the efforts of session musician Al Gorky (Jeff Goldblum) to arrange a once-in-a-lifetime jam session for his frequent recording partner, Buddy Chester (Forest Whitaker). The kicker is that Chester is dying of a brain tumor, and while he wants this session, he doesn't want anybody who's being invited to know. For a long time now, Al has been sliding, slacking off in his musical and his personal life. His wife Janis (Kathy Baker) thinks its about time he won free of the lure of the hipster lifestyle of the '60s, and gave up the dope and easy women. Chester has one final gift to give his friend: he won't allow Al to play in the super-session he's asked him to arrange unless he can sharpen up his playing.

Zack Norman
as Beanstrom
View All

There are no critic reviews yet for Lush Life. Keep checking Rotten Tomatoes for updates!